As fun as it can be to build everything yourself in Vue, there are so many awesome libraries out there.

Not only can using these libraries make your development process so much faster, but it can also provide better QA because many of these dedicated component libraries have take care of all of the testing for us!

Here’s a list of some of the most useful Vue component libraries that you should know about.

Disclaimer: Unless otherwise noted, these Vue component libraries are NOT currently ready for Vue 3. I definitely recommend checking out each library’s product roadmap to see if/when they’ll be making the leap. Also, all Github stars are from the writing of this article on May 4, 2021.

Vuetify is a Vue UI Library with handcrafted Material components. Specifically developed according to Material Design specifications, each component is built with a mobile first approach to be both responsive and extremely modular. 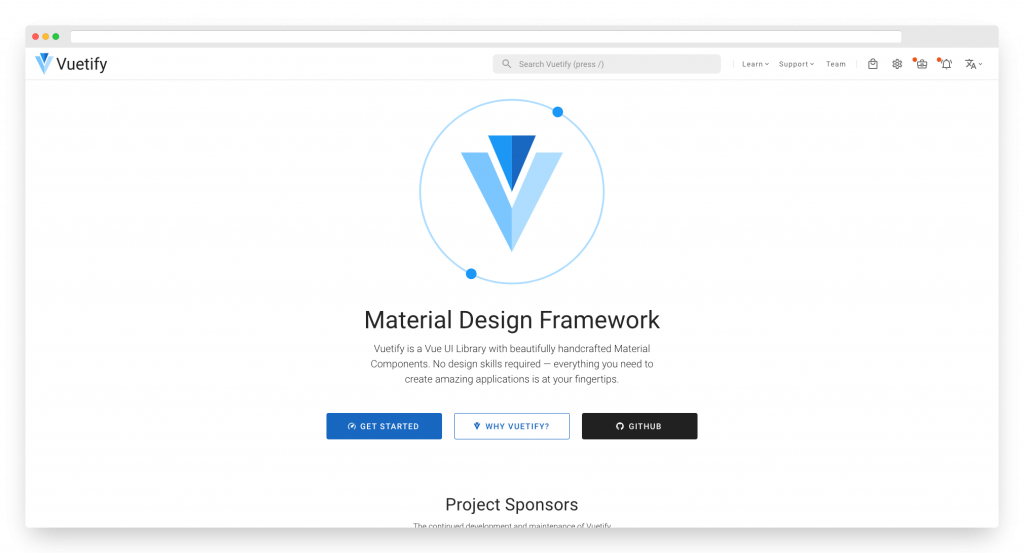 Adding Vuetify to your project with the vue-cli is as easy as running vue add vuetify.

I personally really like Vuetify for two key reasons.

First, it has everything you could need to build your app. With

Second, Vuetify’s documentation is some of the best out there. With comprehensive examples and online resource guides, you’ll never be developing in the dark with Vuetify.

Additionally, as one of the largest Vue frameworks, the community surrounding Vuetify is fantastic, with thousands of developers on forums answering all your questions about development.

Vuetify is in the process of rebuilding their entire framework from the ground up in order to support Vue 3 and the Composition API.

Bootstrap is one of the most popular free and open source CSS and JS framework that helps developers build responsive applications.

BootStrapVue provides an implementation of Bootstrap v4 component and grid system using Vue 2.6 bringing all the amazing benefits of Bootstrap to the Vue environment.

Perhaps most well known is the fact that Bootstrap (and therefore BootstrapVue) has a great solution for responsive design using a grid-based system. It allows developers to change the size of DOM elements depending on the screen sizes.

Here’s a table summarizing the different screen sizes you can target and what your code might look like.

The 1200+ icons are insanely useful when building applications. With icons for accessibility, social media, and guiding the user, BootstrapVue has thousands of built-in ways to improve the user experience of your app. 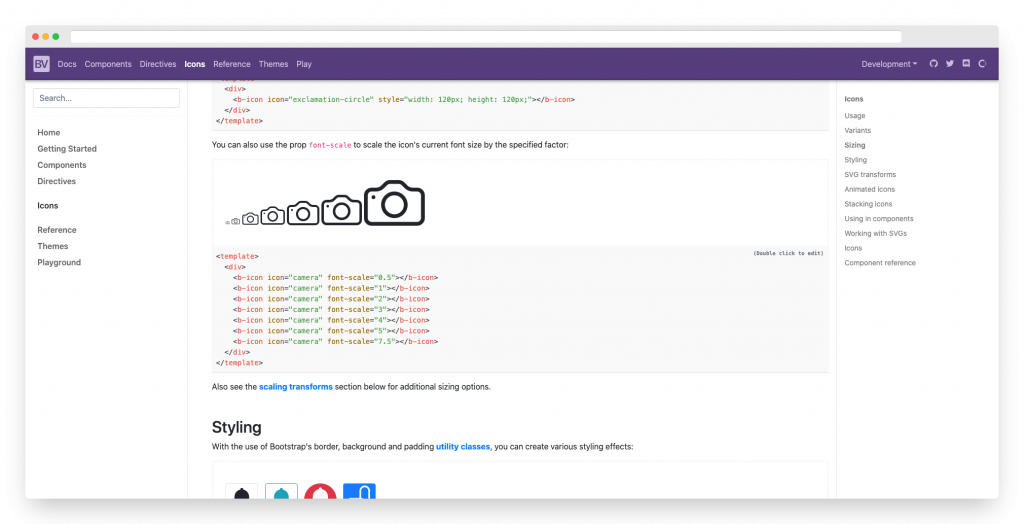 Vue Material is a lightweight library that is built exactly to the Material Design specifications.

It is also easy to integrate other tools like Nuxt.js or Webpack with Vue Material to make things like rendering and deploying much simpler.

One reason I like Vue Material is that there are so many beautiful themes out there using this framework. 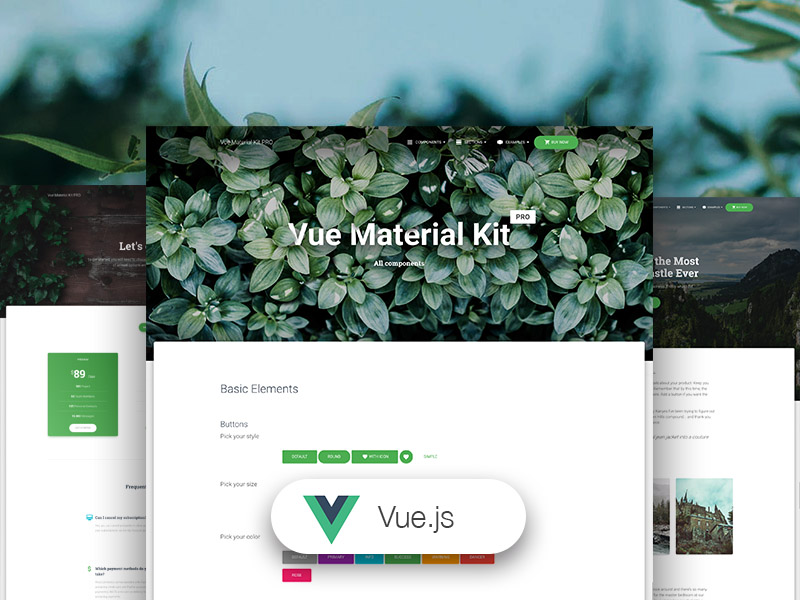 Quasar is an open source Vue.js based framework that allows developers to built responsive apps for almost every platform. Quasar has the built-in ability to switch between build modes. 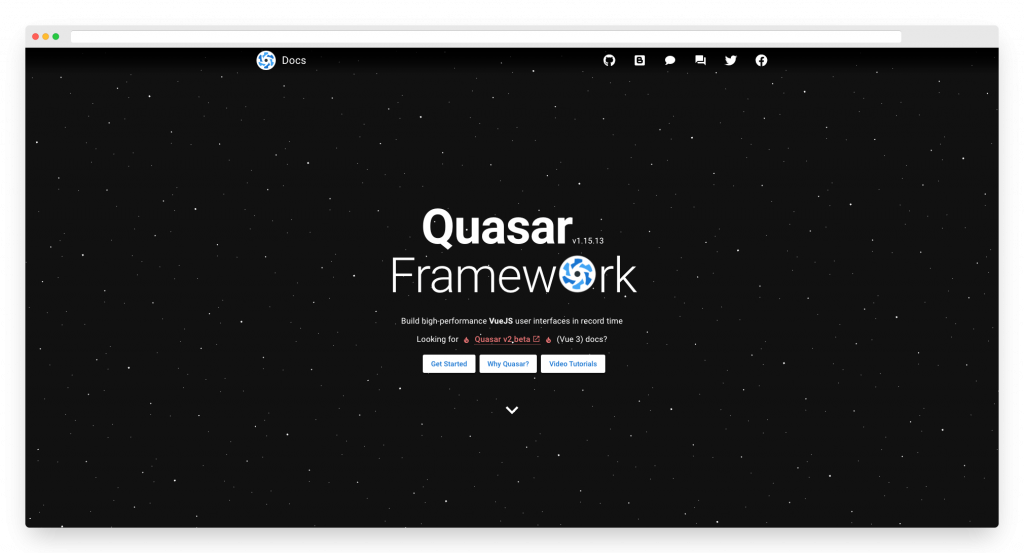 This means that you can make SPAs, PWAs, and SSR apps, but even mobile apps, desktop apps, and browser extensions!

It comes with everything you would want from a frontend framework:

I highly recommend checking Quasar out if you’re looking for a powerful framework with minimal overhead.

Bulma is a modern CSS framework that allows developers to intuitively create responsive components. With plain english class names, it’s simple to understand at a glance how exactly your class names are affecting an element’s styles.

For example, styling different buttons is as simple as this. 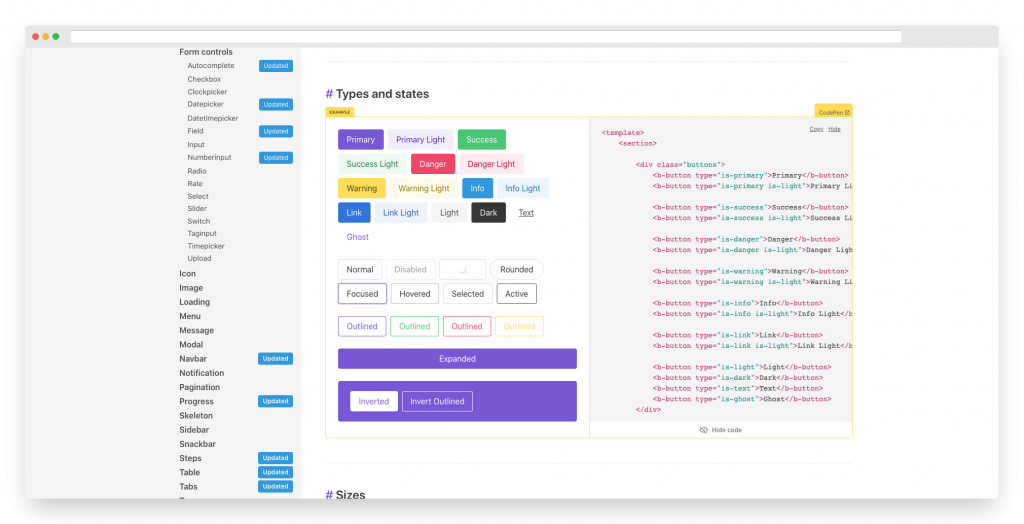 Buefy brings the simplicity of Bulma into Vue by providing developers with dozens of built in components such as buttons, dropdowns, pagination, and more.

All these columns will have an equal width

With just that code, each column will automatically be the same width and also be responsive for mobile devices!

Of course, it has every component you’ll need to start building apps – layouts, buttons, inputs, etc.

But my favorite feature is how easy it is to add your own theme/color scheme to your app.

Of course, you could always customize the colors by overriding the default CSS properties. But, Element provides a Chrome Extension that lets you customize your theme and preview it in real time. 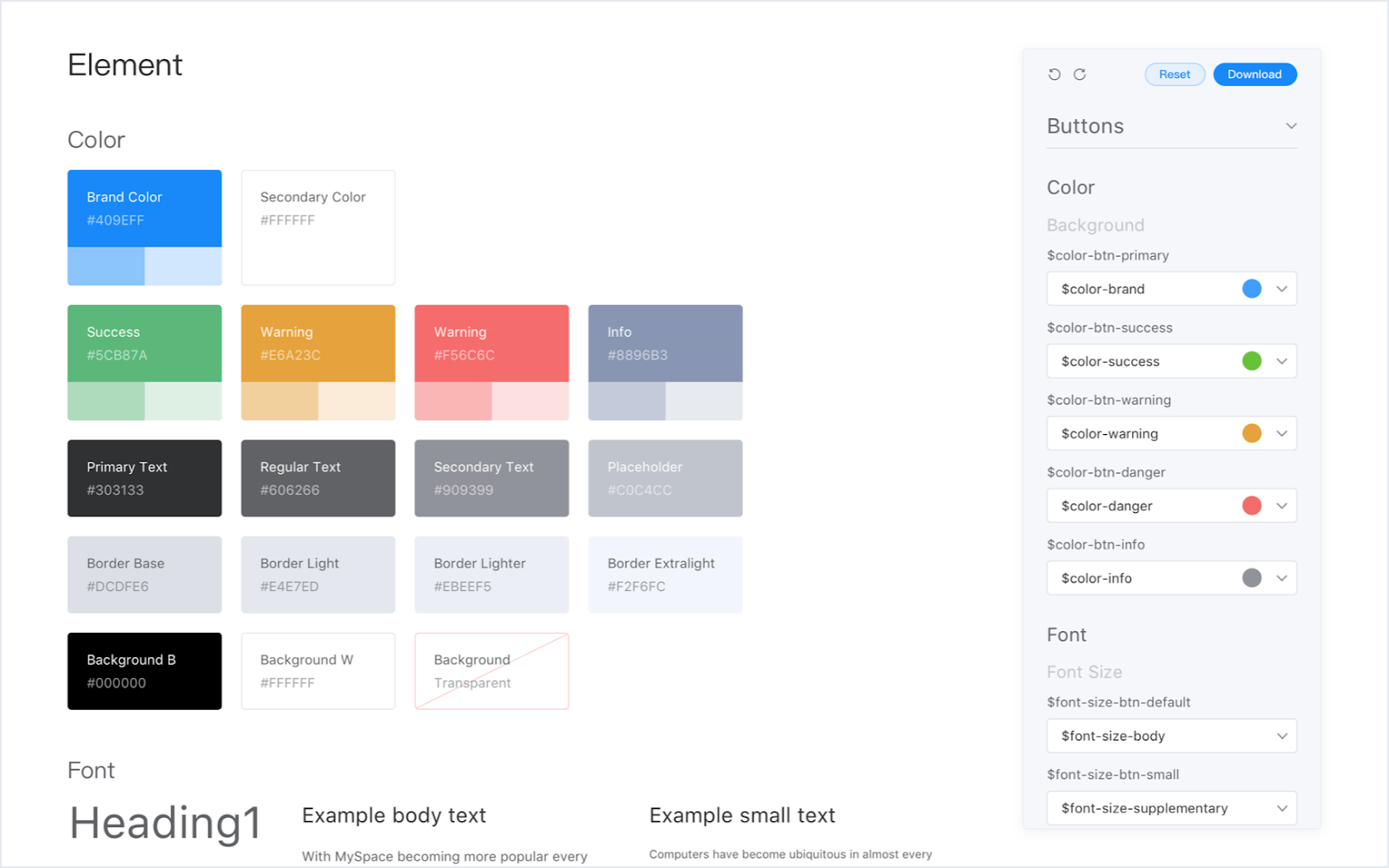 It can really save hours of changing CSS files, seeing if it looks any good, and then continuously changing colors until you find the ones you like.

vue-easytable is one of the most powerful Vue table components I’ve come across.

For a table component, it has so many amazing built-in features that you don’t even realize you need like cell ellipsis, fixed/flexible column sizing, custom filtering, and dozens more.

Plus, look how amazing it looks! 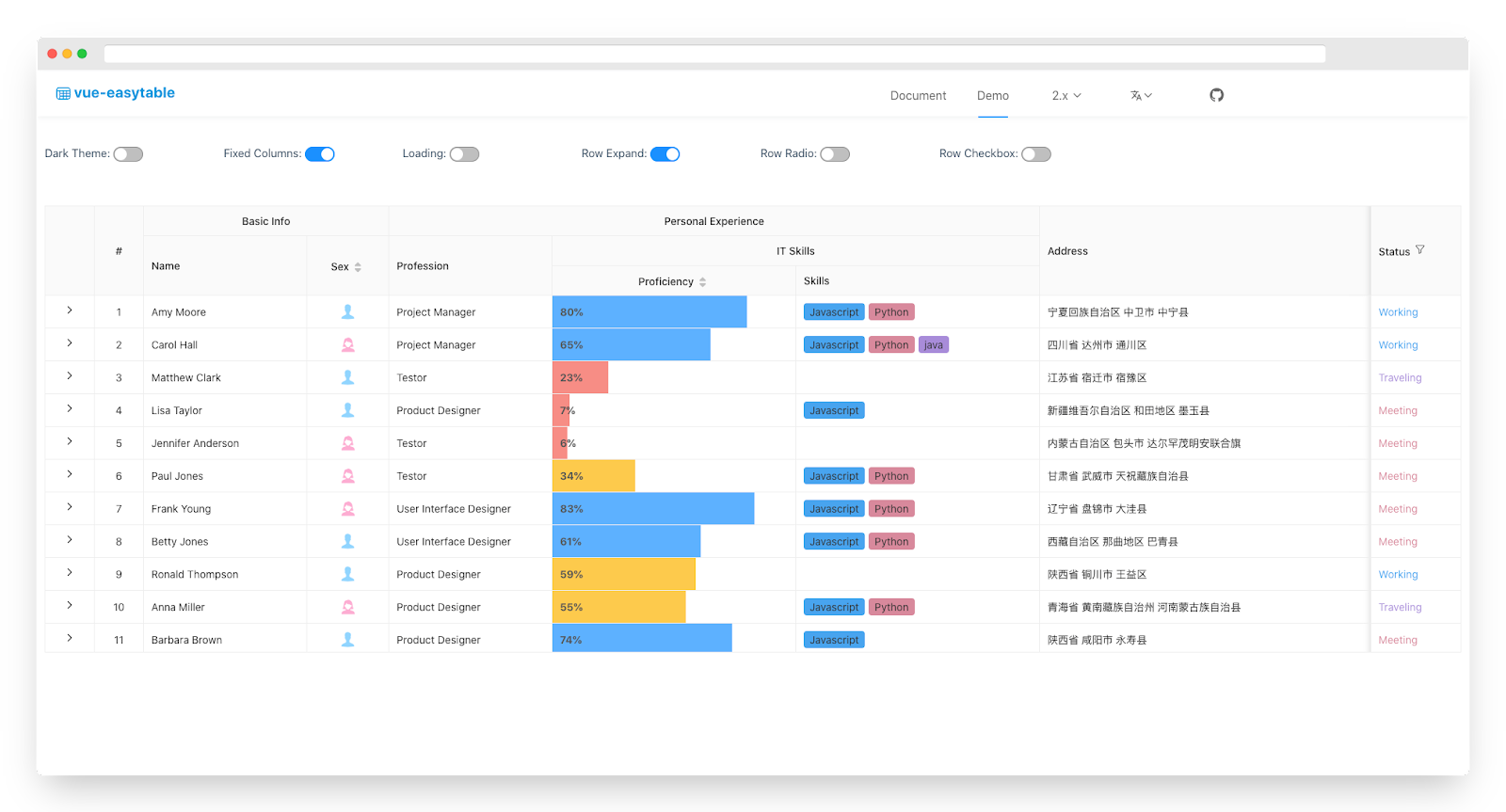 vue-dataset is a set of 6 Vue components to display lists in Vue with built-in filtering, pagination, sorting, and even custom search capabilities.

I really like how flexible this library is – it has all of the essential features you need from a table component, but does not have any limitations.

You can build your table with any sort of DOM element, not just <table> elements. Meaning it’s incredibly easy to use custom components, like cards, to display your list all while keeping the pagination and search features.

Here’s an example of using cards to display a dataset. 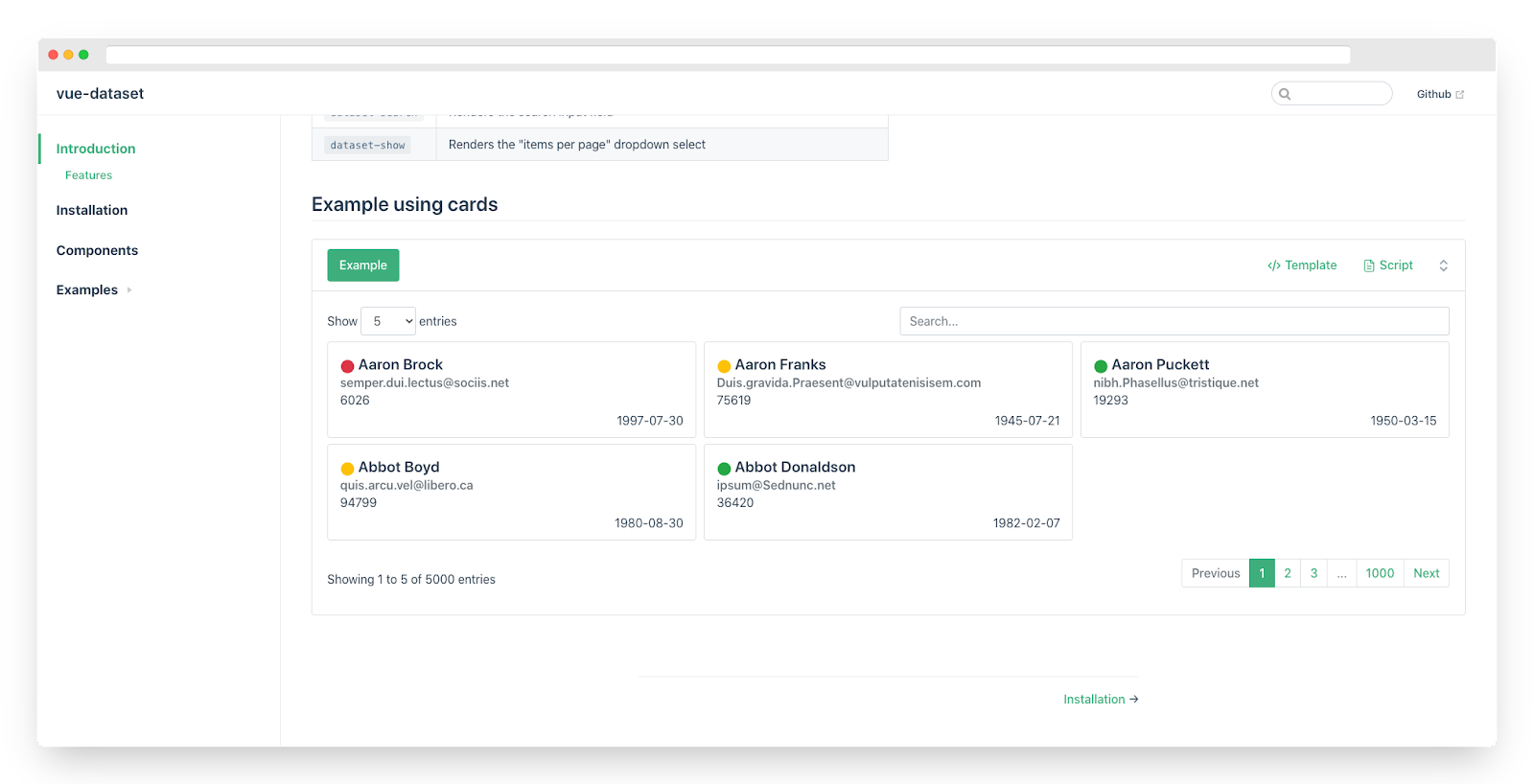 vue-easy-toast is an easy to use tool to create notifications in Vue2.

Creating great notifications is as easy as saying Vue.toast('Can I have everybody`s attention?')

You can choose the style of your toast, the HTML message, and my favorite feature is that you can add fade or slide transitions.

Check out the demo!

If you’re looking for a great, Vue 3 compatible plugin, vue-toaster is the choice for you.

Displaying a notification is as easy as this one liner: this.$toast.show(`Hey! I'm here`)

There are so many ways that you can control your notifications using vue-toaster:

For such a simple plugin, the possibilities are really endless.

vue-simple-spinner stays true to its name. It’s a simple and customizable spinner component that gives you control over the size, color, speed, and text of your spinner.

You can add it to your project today just by running npm install vue-simple-spinner --save.

Here’s an example of what your spinner could look like.

vue-progress-path is the perfect tool for you if you want to create custom, fun loaders.

Its coolest feature is that you can pass it your own .svg file and it will create a loader based on the shape of your svg.

Just take a look at some of the possibilities!

vue-splash allows you to show a splash screen while waiting for content to load.

You can display your logo, some text, and change the background color of the page with just one quick component.

And here’s the resulting splash screen!

Easy to use and incredibly effective.

OR you can build your own custom solution <suspense>

If none of these libraries perfectly match your use case, <suspense> is a great Vue 3 feature that allows you to show fallback content while waiting for asynchronous content to load.

To learn more, check out our article on Vue Suspense Components.

sweet-modal-vue provides a great framework for all sorts of popup modals.

There are different options for different styles and types of modals including:

I love the fact that it comes with built in slots for buttons and components for tabs. It streamlines development while allowing for some next level customization.

vue-tiny-box provides a simple lightbox gallery modal component for Vue. It’s incredibly lightweight and is mobile ready meaning that it supports swipe gestures and is responsive.

While it’s not as customizable as some other options out there, the fact that its only 3 KB minzipped means that it can be incredibly useful for a quick solution.

Plus it looks good! Just check out this demo.

Font Awesome is arguably the most popular icon library out there with thousands of high quality, customizable icons. Vue-Awesome brings this to Vue allowing you to access all of the free icons with a single component.

You can even pass all of the Font Awesome options in as component attributes so making your icon pulse, spin, or scale so it’s easy to customize or even animate your icons. 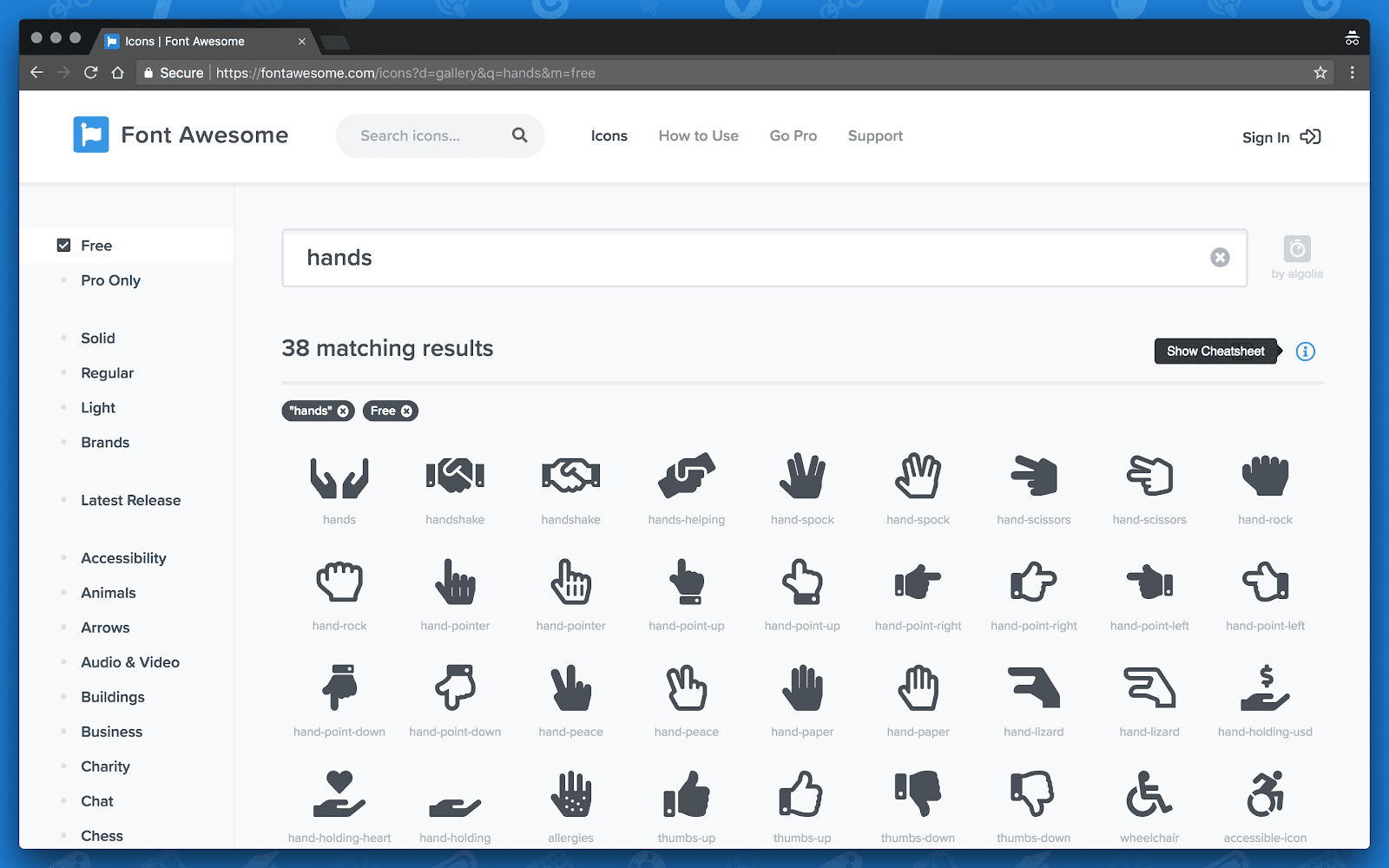 In my opinion, Vue Unicons is one of the most underrated icon libraries that I’ve come across. It has over 1K free SVG icons. It’s super simple to add to your project.

Each Vue Unicon component acts similarly to an svg taking in attributes like name, size, color, and style.

Not only is there great documentation for this library, but it’s so quick to get up and running. It includes each icon as a single file component so you can import exactly what you need for each use case.

Also since Vue Material Design uses SVGs, all you have to do is change some props around to customize an icon’s style.

Vue-chartjs brings the full power of Chart.js into an easy to use and reusable Vue chart components.

It abstracts a lot of the basic logic of the Chart.js framework but still gives you control over all of the customization.

Just by passing in your data either via props, local data, or an API, you can create bar charts, line charts, and more.

One cool feature is that by using the reactiveProp or reactiveData mixins, you can create reactive charts that update to your data in real-time. 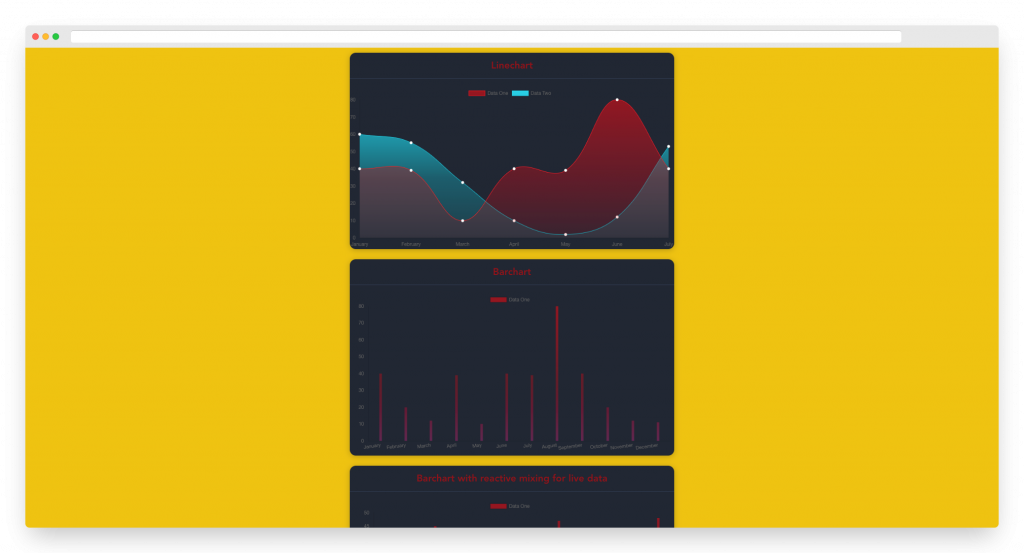 If your project needs a Vue3-compatible Chart.js wrapper, vue3-chart-v2 is exactly what you need.

Using a custom renderChart method, you can easily create your own component using any of the Chart.js graphs.

Here’s an example of a doughnut graph made with vue3-chart-v2. 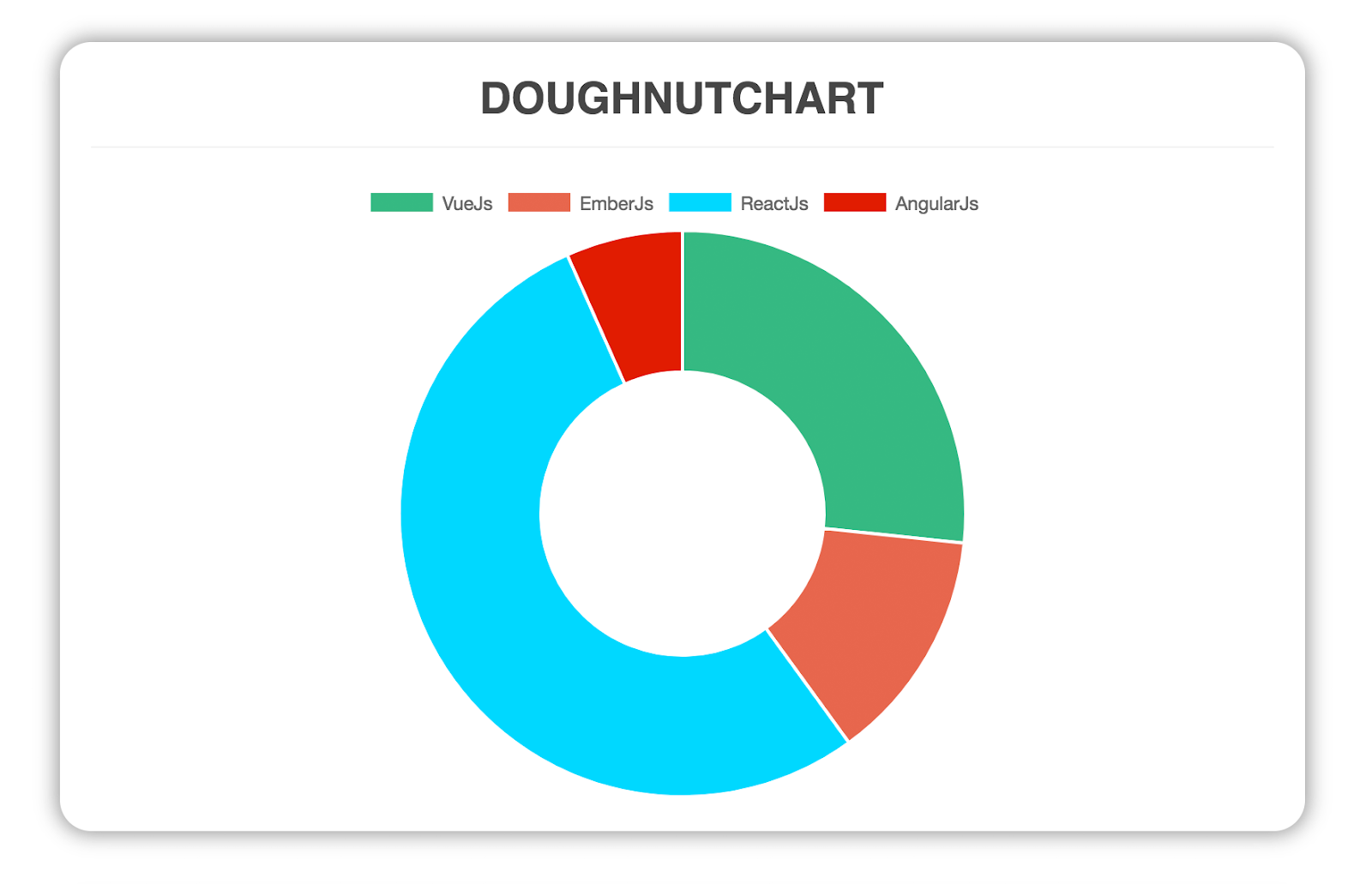 That’s all for our list! I hope you discovered a couple tools that you’re excited to use in your projects.

If you have any libraries or plugins that you think deserve to be on this list – or if you’re working on an something cool yourself – let me know down below or shoot me an email at matt@learnvue.co

I love web dev and making things // Founder of LearnVue

Getting Started with Vuex in Vue 3

Vuex is a state-management system following the Flux pattern that lets us create a global store with unidirectional data flow across our Vue 3 app.

Rendering performance is a vital metric for frontend developers. Improve your Vue app's performance with these two directives.

Making a Markdown-Based Blog with Vue and Gridsome

Use Vue with Gridsome is one of the easiest ways to create static websites from just Markdown files.

5 VueUse Library Functions That Can Speed Up Development

VueUse is an open-source project that provides Vue developers with a huge collection of essential Composition API utility functions for both Vue 2 and Vue 3.

Want to stay ahead of the curve?